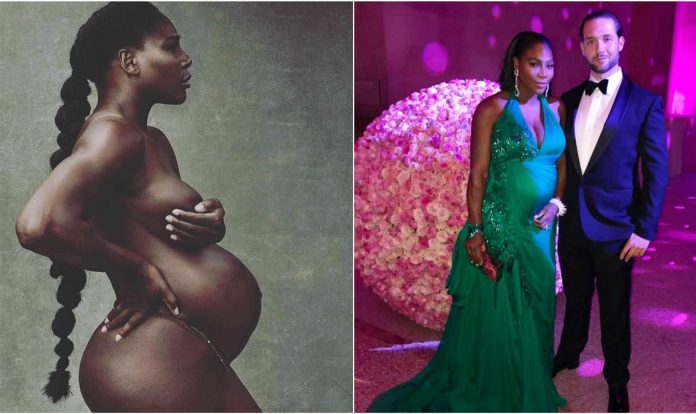 She may have won the biggest titles in professional tennis, but today, Serena Williams is most proud of her baby bump. The soon-to-be baby mama posed in a sultry shoot on the cover of Vanity Fair in nothing but a thong and a belly chain. The photograph was taken by none other than photographer Annie Leibovitz, who also produced that famous photo of a pregnant Demi Moore back in 1991.

The tennis star is currently 7 months pregnant, and seems to be enjoying this new phase in her life. She is currently engaged to Alexis Ohanian, the founder of Reddit. Their romance is just as crazy and passionate as Serena herself. If you remember, he had famously proposed her after flying her all the way to Rome to the same table where they first met. Serena says she had an inkling that he was going to say something important, especially after he insisted she make the trip, even with professional commitments at hand.

Just one month after her engagement, she recalls that she wasn’t really feeling herself. After her best friend urged her to take a pregnancy test, she did so pretty apprehensively. “I’ll take it just because (a) to prove you wrong and (b) because it’s fun. Whatever. It’s like a joke. Why not?”

“If you would have told me last year in October or November that I would have a baby, not be pregnant but have a baby, I would have thought you were the biggest liar in the world. This is kind of how I am right now. This is happening sooner, rather than later, and it’s going to be so fast.” The tennis champion says she hasn’t even created a baby room yet for her new bundle of joy.