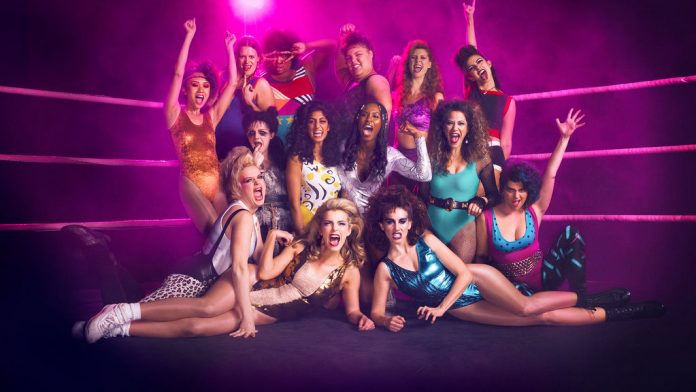 During the 1980s, professional wrestling had captured the imagination of the country, inundating television sets with muscular men in colorful spandex, who body slammed each other in front of packed arenas. To cash in on this popular phenomenon, promoter David McLane and film director Matt Cimber created an all-female pro-wrestling series in 1986, titled ‘Gorgeous Ladies of Wrestling’ or ‘G.L.O.W.’ The show connected well with wrestling enthusiasts, who welcomed a change from the usual fare and appreciated the stereotypical, often humorous morality plays of good triumphing over evil. Over its four-year run, the series featured a diverse cast of lady wrestlers dressed in bizarre costumes, who fought each other in the ring as part of exaggerated storylines that also included many over-the-top comedy sketches. The characters represented a broad range of body types, races and ethnic backgrounds, with some memorable names such as Babe the Farmer’s Daughter, Jailbait, Little Fiji, Big Bad Mama and Zelda The Brain. G.L.O.W. successfully gained a cult following during the late Eighties, viewed as being both exploitative as well as empowering at the same time.

The iconic women’s wrestling league may have been destined to drift into obscurity over the past couple of decades, but a 2012 documentary ‘GLOW: The Story of the Gorgeous Ladies of Wrestling’ made by Brett Whitcomb inspired writers Liz Flahive and Carly Mensch to team up and create the new Netflix series. Executive produced by Jenji Kohan (‘Orange Is the New Black’), ‘GLOW’ stars Alison Brie (‘Community’ and ‘Mad Men’) as Ruth Wilder, a struggling, out-of-work actor who finds herself auditioning for a part in a fledgling all-female wrestling league that is managed by a suitably sleazy B-grade filmmaker, Sam Sylvia (played by the excellent Marc Maron). Just like the original league, the show has actresses auditioning for the roles, and then being trained to fight by professional wrestlers. To coach Brie and the other actors in real life, the producers brought on board Chavo Guerrero Jr., whose uncle Mando Guerrero had trained the original G.L.O.W. wrestlers back in the Eighties. With the production being dominated by women, it resulted in an unusually safe and protective environment for performers to take the creative risks they needed to.

While the real league was staged and filmed in Las Vegas, GLOW shifts the action to Los Angeles for its fictional storyline, but expertly recreates the late-Eighties period, with neon lycra, hairspray, glamour and grit aplenty. The world of women’s wrestling has gone through a revolutionary change since that time, but the ladies continue to walk a fine line between being objects for men to gawk at, and performers with a license to express themselves in liberating fashion. The show explores this theme centrally, while also allowing the characters to deal with the troubling racial stereotypes that were prevalent in the era. There is an admirable level of attention to detail from the creators, who have taken great care to see that their version of GLOW accurately represents the world of the original Gorgeous Ladies.