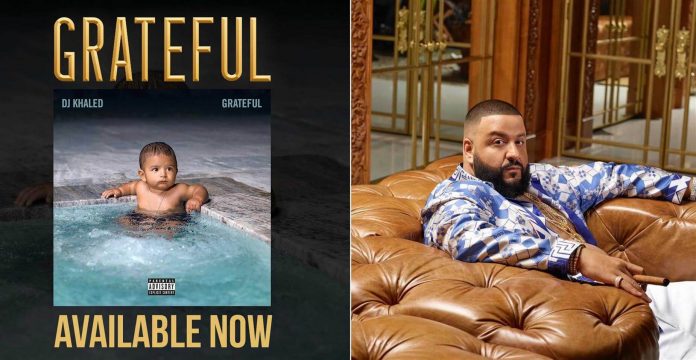 The long awaited album, “Grateful,” by DJ Khaled officially landed in the streaming media today June 23. The incredible album promised to fans since February features some of the latest hits by DJ Khaled featuring some of the highest profile musicians of our time.
DJ Khaled, now 41, gave the best selection of collaborations and hit singles to his fans in the Grateful by mixing some of the best performing flavors in the industry. The 23 track album has works DJ Khaled collaborated with Drake, Beyoncé, Jay-Z, Migos, and Nicki Minaj among many other superstars. DJ Khaled’s tracks come with videos including the now number one trending “Wild Thoughts” featuring Rihanna except the anticipated song with Nicki Minaj.
All songs included in the 23 tracks in DJ Khaled’s Grateful are hits and very difficult to pick a favorite. “I’m the One” track he worked with several musicians including Justine Bieber, “Shinning “that features Jay-z and wife Beyoncé, and “To the Max “featuring Drake are included. Guest appearances in the Grateful album include Nicki Minaj, Travis Scott, Alicia Keys, Nas and Calvin Harris.
Another incredible thing happened as DJ Khaled introduced his four months old son Asahd to the music and business world. According to Khaled, his son Asahd is the executive producer of the album. Speaking to Jimmy Kimmel Live, the infant was influential in picking the right vocals, the beats and the right energy to make the hit songs. Asahd would rock and grin to indicate a smash hit or look deep in thought for a rather substantial hit and is said to have had an unfortunate thrown up on his daddy’s shoulder during the mixing of the Shining hit song.
The earlier than expected premiered Grateful is now on Apple and iTunes including Khaled’s latest track “I’m So Grateful” which is an intended intro to the album. A special edition on June 22 on the “We The Best Radio” launched the album that reached the streaming services by midnight. While it is still in waiting, his video with Nicki is expected to be incredible and great.