Donald Trump, the 45th President of the United States has always emphasized his close relationship with his family. Trump has 5 children and 8 grandchildren. Let’s give you the official tour of Mr. President’s family –

Vanessa and I are ready for #nerdprom aka The White House Correspondants Dinner… A long way from where I was in Indiana a few hours ago in camo. All in all I much prefer the camo!!! #mrsvanessatrump #makeamericagreatagain #trump2016 #WHCD

Donald Jr., aged 38 years, is Trump’s first born and the son of his first marriage to Ivana Trump, a Czech model. Donald Jr. graduated from the University of Pennsylvania just like most of the kids in the Donald Trump family. And just like his father, Donald Jr. has five children – Chloe Sophia Trump, Kai Madison Trump, Tristan Milos Trump, Donald Trump III and Spencer Frederick Trump.

Time for a #throwbackthursday Fam pic. One of the top 3 hardest things to do as a parent is have all kids looking at a camera nicely smiling at the same time. A virtual impossibility, but this is pretty close. The girls look great, the boys… well let's just say that gave it some effort.

Donald Jr was heavily involved in The Apprentice show where he appeared as an advisor and guest judge alongside his dad, sister Ivanka and brother Eric Trump. Though there are rumors that he might run for New York mayor in future, Donald Jr says he is not in a hurry to join politics.

A great discussion with two world leaders about the importance of women having a seat at the table! ????

Ivanka is Trump’s first daughter and just like Donald Jr, a child of Trumps’ first wife. Ivanka, aged 34, used to appear occasionally on The Apprentice before her dad’s political career took off. Currently, she has an office in the West Wing and is a special assistant to the president. Just like her mother, Ivana, she too started off with a modeling career in her teens and has a fashion label to her name.

She got married to real estate developer Jared Kushner (the publisher of the Observer) in 2009, and they have three kids together – Arabella Rose Kushner, Theodore James Kushner and Joseph Frederick Kushner.

Our first picture as a family of five! Thank you for all of the love and well wishes.

We owe the biggest 'thank you' of all to our parents. Thank you for all of your love, support and guidance always — and, thank you for the wedding of our dreams! ❤️ @realdonaldtrump @erictrump

Eric, aged 32 years, is the third child of Donald Trump and his first wife Ivana Trump. Just like Donald Jr, he was a boardroom adviser and judge on The Apprentice show. Eric is credited with creating Trump Winery and Eric Trump Foundation. He is married to Lara Yunaska who is a producer for the Inside Edition and a personal trainer.

The 22-year old is the only child of Donald Trump and his second wife, actress Marla Maples. Tiffany was born just before Donald Trump and Maples tied the knot in 1993 and is named after Tiffany & Co, a jewelry store. Tiffany graduated from the University of Pennsylvania and has released a pop song titled “Like a Bird”. She often models for her friend Andrew Warren’s fashion shows. 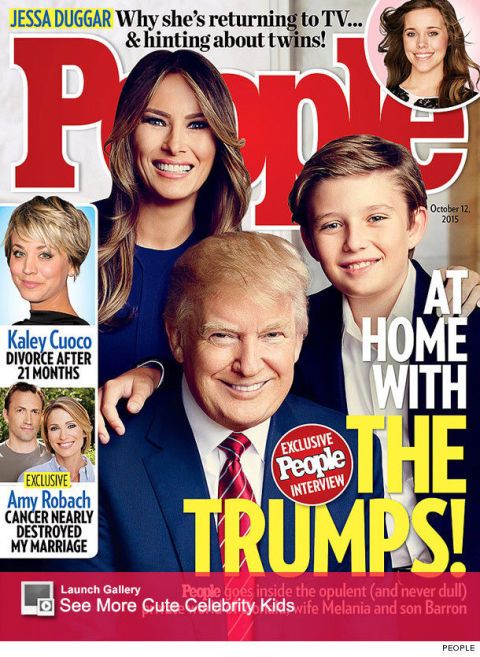 Barron William is the only child of President Donald Trump and his current wife, Melanie Trump, a Yugoslavian model. Barron is nicknamed Mini-Donald because he loves donning suits and ties just like his father. Though the ten-year-old tends to stay out of the limelight, he recently made it to the cover of the People magazine.

And that’s the entire first family is one frame –

I wanted to take this opportunity to thank my #family for their absolutely amazing support since I announced my candidacy on June 16, 2015. They have been there for me every step of the way. Because of them — I can focus on becoming your next President of the United States — and MAKING #AMERICA GREAT AGAIN with you! #Love you all!