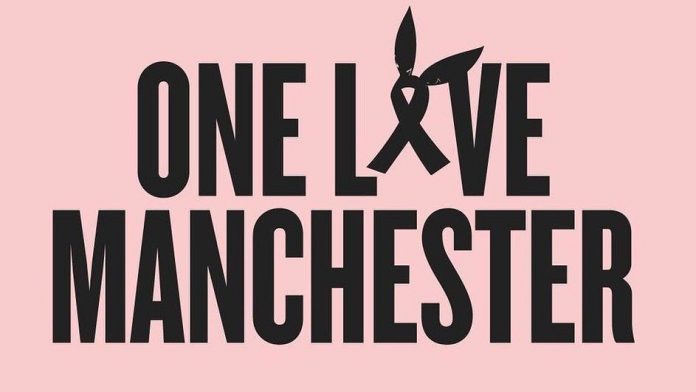 The One Love Manchester concert was a big hit as more than 55 thousand people came out to attend the star studded tribute to those killed / injured in the recent Manchester bombing. Despite a warning by the government that another attack was likely, several attendees thronged to the venue to show their solidarity.

All proceeds from the One Love Manchester concert will go to the bombing victims and their families. Stars performing at the concert included Ariana Grande, Justin Bieber, Scooter Braun, Miley Cyrus, Katie Perry, Black Eyed Peas, Robbie William and Coldplay’s Chris Martin. Organized and executed by Ariana Grande and Scooter Braun, the event had several tearjerking moments. Before Ariana Grande’s performance, Manager Braun paid a tribute to all the bombing victims and said, “Hatred will never win, fear will never divide us, because on this day, we all stood with Manchester.”

The One Love Manchester Concert felt like a life-affirming act of defiance and a dignified tribute to the bombing victims. The concert was broadcasted live across the globe and attendees went back chanting We are Strong as they exited the Old Trafford cricket ground. It concluded with Ariana Grande’s rendition of Somewhere Over the Rainbow.

See memorable moments from the One Love Manchester Concert –

Our condolences go out to all the victims of Manchester bombing.