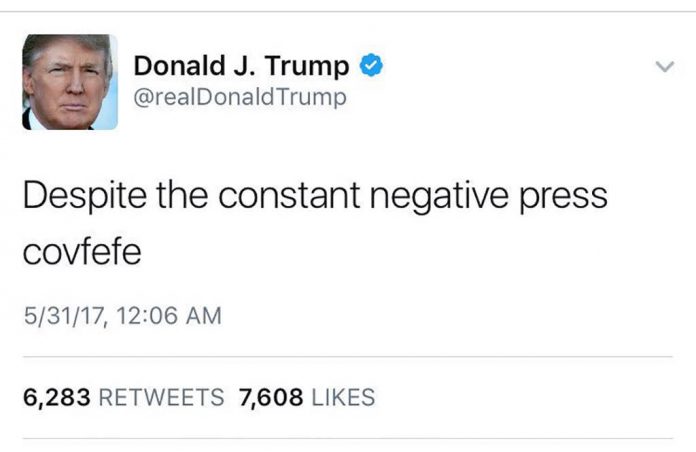 We are truly, truly living in very unique times. After the ascension of Donald Trump to the American Presidency, it seems he has more important things to do than think about the country’s economy or work on foreign policy. A tweet by the President, which has now duly been deleted, went as: “Despite the constant negative press covfefe.” What?! Exactly.

Twitter soon went into a meltdown, wondering what in the world the President was talking about. Known for his eccentricities and gibberish that he keeps posting to Twitter, this one had to be something new. Though people aren’t really fond of the man, this one tweet of his earned more than 100,000 re-tweets. Everyone wanted to know what he was talking about. He had posted it sometime early in the morning, so some assumed he meant “coffee”.

Then came the difficult part of assuming how to pronounce it in the first place. Some said it was pronounced “cov-FEE-fee”, while others chose “cov-FAY-fay” and more debaters went for “cov-FEH-feh”. A humble minority stuck to “cov-FEEF”. When the tech-savvy lot jumped onto Google Translate to find out a possible meaning, they were met with a Samoan possibility. Just what could President Trump have meant?

What makes this story more bizarre, is that a man from California took advantage of the situation and registered a license plate with COVFEFE. And then celebs took their turn making some sense of the word. Here’s what the most hilarious ones had to say –

#covfefe Full potential as a person has been reached. pic.twitter.com/yGR0DapSUs

i love the internet #covfefe pic.twitter.com/EY88OXLdo5

Couldn’t resist getting in on this #Covfefe fun. pic.twitter.com/FilonJY60s

And if you thought THAT was bizarre enough, the President then went on to tweet in favor of his first tweet –

Who can figure out the true meaning of “covfefe” ??? Enjoy!