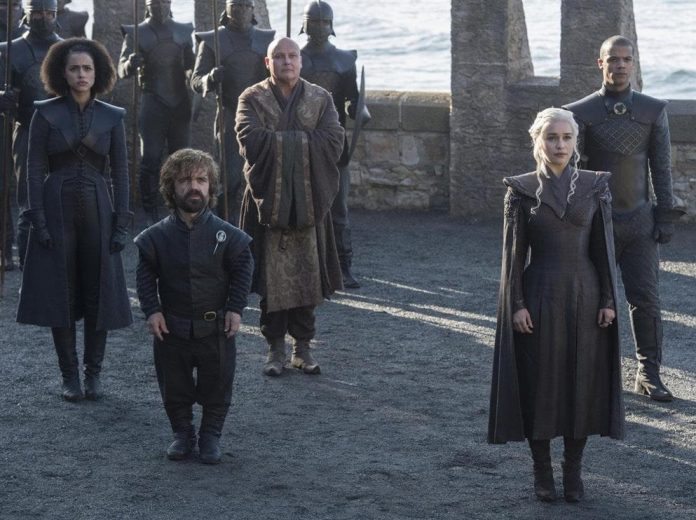 HBO released some fresh images from the upcoming Game Of Thrones Season 7. All the main characters are live and well, garbed in their house’s attire. From Cersei Lannister, to Jon Snow, Littlefinger and Sansa Stark, Daenerys Targaryen and even The Hound. Those conspicuous by their absence are Melisandre, the Night King and of course, Dany’s beloved three dragons. Of course, they were doing just fine in Season 6, so hopefully they’ll be visual when the next teasers arrive. Fingers crossed.

Queen Cersei sits firmly upon the Iron Throne. And the one always at her side, her twin brother and lover, the brave Jamie Lannister.

Tyrion Lannister, or the Imp, now the Hand of the King.

Missandei at the Queen of Dragons’ right hand.

Daenerys Targaryen now dressed like a king, ready to take back what is rightfully hers – the Seven Kingdoms.

Arya Stark, the girl who has a name. And she is going home.

Jon Snow in the crypt of the Starks in Winterfell. He finally knows his mother.

Littlefinger and Sansa Stark together again.

Tormund and Brienne – we ship this couple. Will sparks finally begin to fly between the two?

Meera Reed desperate to take Bran Stark back to Winterfell. Can she outrun the White Walkers?

Samwell Tarly is back where he wants to be – in Oldtown, among his books. And Hannah accompanies him.

Davos Seaworth, the one they called The Onion Knight. Now at the right hand of Jon Snow.

Lyanna Mormont – does she still pledge allegiance to Jon Snow?

Varys, who they call the Eunuch. What plans are going on in that shiny head of his?