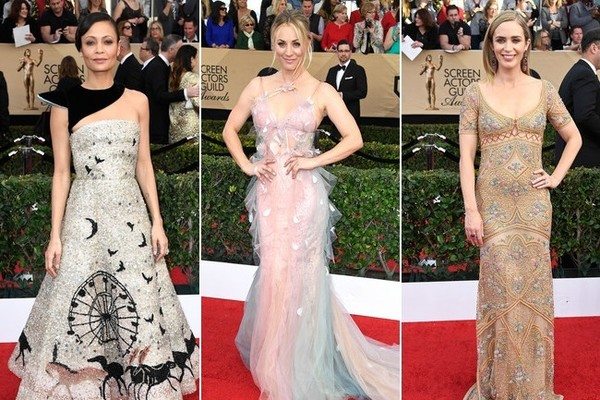 The Screen Actors Guild (SAG) Awards 2017 took place and some of the biggest and most shiny stars made their way to the red carpet. This year’s greatest picks, including modern musical La La Land and the riveting series The People v. O.J. Simpson: American Crime Story took home most of the awards for the night. But the biggest highlight had to be the stars who took to the red carpet in stunning ensembles that could take anybody’s breath away.

Here is the best dressed list from the SAG Awards 2017 –

The Fences actress looked stunning in Vivienne Westwood in white.

The Latina star was beautiful in this tropical Gucci yellow gown.

The Manchester by the Sea actress in Louis Vuitton.

The Westworld actress in an Altazarra suit.

The veteran actress in Dior.

The Game of Thrones actress in Vivienne Westwood Couture.

Louis Vuitton in red on the Game of Thrones actress.

The Jane The Virgin actress in PatBo.

Chrissy a successful model, and now wife of John Legend attended the SAG awards in a black high slit dress.

The veteran actress in Dior.

The gorgeous actress in Elie Saab.

The Black-ish star in Ulyana Sergeenka.

The Spotlight actress in Lanvin.

The Girl on the Train in Cavalli Couture.

Here are all the winners and nominees from the SAG Awards 2017.

Don’t miss the best looking couples on the red carpet at the SAG Awards 2017.