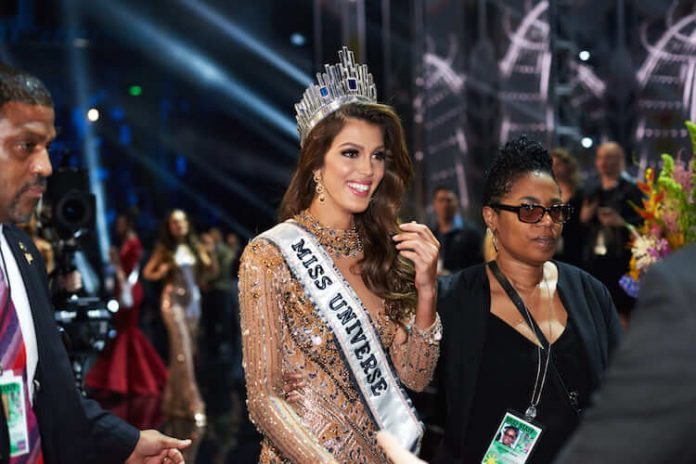 Bringing you the latest from the Miss Universe Pageant held last night – This year France put up a brilliant show with beauty queen Iris Mittenaere being crowned Miss Universe 2016.

Steve Harvey even announced the ‘correct’ winner this time (remember the meme worthy Steve Harvey moment he pulled off last time, by crowning the wrong contestant?) and ensured that the ceremony remained drama and controversy free!

This year’s ceremony was a magnificent affair which began with 86 promising contestants as they walked the ramp in costumes reflecting their traditions, there was a bikini round and debated on hot topics of international immigration, open borders and the refugee crisis faced by most of the European countries.

But in the end, Miss France, Iris Mittenaere swept them all away with her swishing walk, bold looks and opinions! In the final question round, Miss France highlighted the benefits of open borders when asked about her opinion on the global refugee crisis –

Eager to dig into who Iris Mittenaere is? We got all the details right here –

Iris Mittenaere is from Northern France and was born in Lille, in the Nord Pas de Calais region. She’s currently pursuing a Degree in Dental Surgery and is passionate about dental care. She wished to continue this passion through taking her awareness campaign for dental care and oral hygiene all around the world.

Miss France 2016, now Miss Universe 2016, revealed that in her reign as Miss France she travelled around the world practically 4 times, in terms of miles! And her interests include cooking french specialities. So if Miss Universe had a talent segment, her’s would most definitely be cooking.

Apart from cooking, this young beauty queen is into extreme sports and enjoys bungee jumping, sky diving, hand gliding – you name it! She says tandem skydiving over her region of northern France was an “incredible experience.”

Yes, you read that right, the French like Beyonce too. Iris’s favorite song is “Run the World (Girls)” by Beyoncé while her favorite movie is Life Is Beautiful by Roberto Benigni.

Our hearty congratulations to Iris Mittenaere once again!

Check out pictures of all 86 contestants from the swimsuit round of the Miss Universe 2016 Beauty Pageant right here!