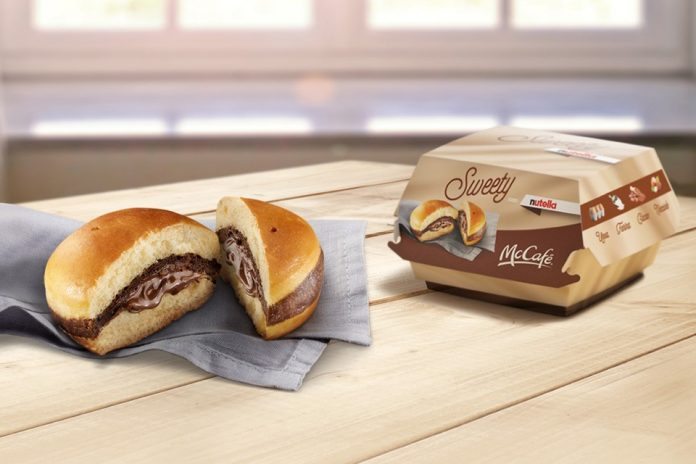 FYI, McDonald’s rocks. Remember that time when you were broke, and no one was there for you, but McD’s? From their all-day breakfast to their dollar cheeseburgers, there is always something for everyone beneath the golden arches. And in case you had your doubts about the global fast food giant, then here is something to grab you by the sweet tooth: McDonald’s just introduced an oozy, gooey Nutella burger!

But here’s the catch: they probably knew that Nutella tub supplies are in abundance world-over, so they introduced the guilt-ridden burger through their Italy joints only! McCafé Italy will now be serving what they call Sweety con Nutella. The burger is made up of an extremely thick layer of the hazelnut spread sandwiched between their signature buns. It comes packaged in one of their burger boxes (the ones meant to package greediness) and not in a paper wrapping, because no one wants to waste a drop of Nutella that could smear the paper.

On their Official McDonald’s Italy Facebook page, they shared a picture of the oncoming cause of obesity and sugar overdoses in the European country with the caption: “A soft sweetness has arrived that you will not be able to resist”. No kidding.

Btw, is there any way we can forget all this political nonsense and start a campaign to get these Sweety con Nutella burgers out to the rest of the world. They can have my money.

And in similar news, McDonald’s Japan just re-introduced the Katsu burger. It had a cult following back in the ’90s, but was discontinued because they decided they wanted to deprive their customers of meaty goodness. What is a ‘Katsu’ anyway? It is – and queue the drooling – a breaded, deep fried fillet of pork that oozes with cheese when you bite into it. The fillet will be sandwiched between their signature buns with lettuce and spicy sauce. Yes, international airlines, that will one one-way ticket to the wonderful country of Japan, please!