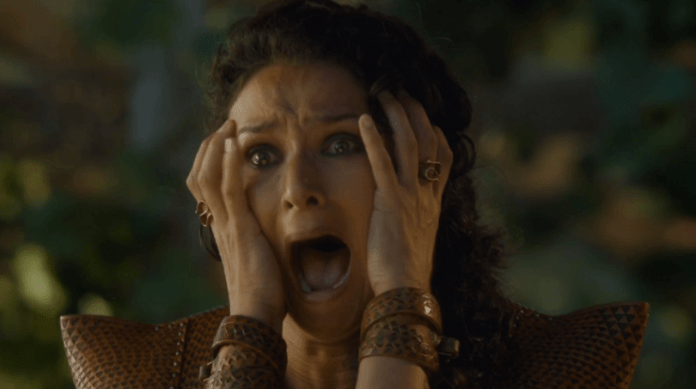 George R R Martin looks like he’s in no hurry to finish The Winds Of Winter just yet, and HBO already made headway with the storyline to Game Of Thrones in Season 6. What we were left off with was –

Though we have to still wait a few more agonizing months for Season 7 to come around, shooting has already begun, and there have been so many leaked pictures of the cast in different locations, most recently the one of Jon Snow with the Onion Knight meeting Tyrion and Dany.

But now, the biggest spoilt-sport in the history of TV, a Reddit user called maureencreates leaked the entire storyline for the upcoming season and yes, we are going to share it with you because we are just as nasty.

Cast member, Nathalie Emmanuel who plays the part of Missandei, was quick to call out the leaker on Twitter

It's really disappointing there are people who are determined to ruin Season 7 for everyone… ? #spoilsports

I'm simply saying I don't see why we can't focus on making a great season for the fans in peace… it's a shame. #notangryjustdisappointed

Now, let’s get to it and though you can read the entire plot, episode by episode on UNILAD, we are here to highlight only the main aspects that will have your jaw drop. Be ready for some MAJOR spoilers ahead. Winter is here.

And so it begins…

The White Walkers have reached the Wall. Bran has managed to make his way across and immediately meets with the new Lord Commander, Dolorous Edd to warn him of the oncoming danger.

Dany has reached Dragonstone, where if you remember, she was born and named Danaerys Stormborn and escaped with her brother Viserys years before. She enters Stannis Baratheon’s old war room, the one with the map of Westeros as a table top and calmly asks Tyrion, “Shall we begin?”

Jon Snow and Davos Seaworth make their way to Dragonstone, not to pay obeisance to the Mother of Dragons, but to acquire dragonglass that will slay the White Walkers. After all, Winterfell is closer to the Wall that Dragonstone and they face imminent danger. This is the moment we have been waiting for – Fire and Ice meet! The meeting is not as we had hoped, because Dany will have none of it until Jon recants his title of King in the North.

Bran and Arya Stark arrive safely in Winterfell. Meera leaves for home. Ok, we will repeat this – Bran and Arya are home! *cries tears of joy*. Which means that the living Stark children have a reunion of all reunions. And Bran will immediately tell the others about Jon’s birth and his legacy – he is, in fact, the mystical Aegon.

Jamie meets with his long-lost Imp brother, Tyrion, who if you recall was in hiding and a wanted man for killing Tywin. Tyrion requests Jamie to make Cercei surrender to Dany, which (no guesses here) is refused. And on the topic of Cercei and Jamie, it seems that the new Queen of the Seven Kingdoms, Protector of the Realm is pregnant with possibly Jamie’s child, which should make the prophecy given to her as a child become confusing (when she was told her death would be after that of all her children). But, we also see her miscarrying, as she wakes up in a bed of blood.

Well, Jon reaches Eastwatch-by-the-Sea, determined to capture a zombie wight and present it to Westeros to gain support for the oncoming war. However, he and his band of warriors (including the Red Priest – Thoros, Gendry and Tormund), face the White Walkers, where many are killed. Dany comes in time to save them, but Viserion her dragon is killed and is reincarnated as a zombie dragon for the Night King. She leaves Jon behind, but he is saved by his long-lost uncle Benjen (Coldhands), who sacrifices his life to save Jon.

The season ends with the fall of the Wall by the Night King and a blue fire breathing Viserion. Also, FYI, Jon and Dany DO IT in a boat on the way North. Yummy!