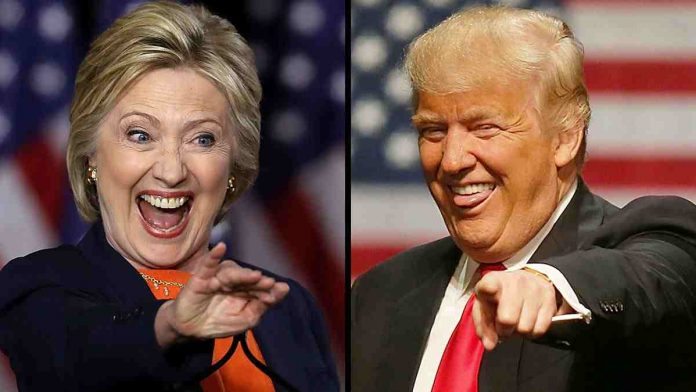 Remember when Donald J Trump used to host The Apprentice? There was never a time when you were not entertained. He always had something rude to say to somebody else and his blonde hair got in the way. On the other hand, Hillary Clinton raised herself to one day become the first lady President of the United States. She studied politics as a student. She married a man who would be considered as one of the most beloved leaders of the country, albeit with his sexual scandal while still in the White House. With “the Donald”, it is always about him being right; with Hillary, it is always about her being politically correct.

“Keep you in suspense”

Take a guess about who said this, and why. It came from Republican Presidential candidate, Donald Trump, when asked if he will surrender if Hillary wins the election. Hillary termed the statement as “horrifying”, in that it would break with tradition of peaceful transfer of power. Trump in turn said that Hillary “never should have been allowed to run” because she used a private email server while serving as Secretary of State.

Count on Trump to not have a filter, even when it comes to a political debate being aired on an international platform. When the topic of allegations against him in the media by women who accused him of making sexual advances, Trump said he didn’t even know them and that he didn’t apologize to wife, Melania Trump, as he didn’t do anything wrong. He then called Clinton a “nasty woman” and said she is the one responsible for bringing these women on camera to lie about him. Clinton in turn responded that Trump “thinks belittling women makes him bigger”. Trump also said that nobody respects woman as much as he does, to which their was audible laughter from the audience, FYI.

Another bone of contention between the two candidates is Trump’s policy to build a wall at the US-Mexican border that he said he will make Mexico pay for. He also reiterated at the debate that he was going to eliminate the country from drug lords and “bad hombres”, which made the Internet go berserk, with memes and videos channelling that statement into beauty clips called “bad ombres”, referring to the hair-highlighting style.

When it came to talking about abortion rights for women, Hillary won this round by making a statement that had all uteruses and feminists doing a little dance. She said: “This is one of the worst choices that any woman and her family has to make, and I do not believe the government should be making it”. Trump went on the offensive, accusing her of allowing the procedure of “ripping babies” from their mother’s wombs. To sum it up: Trump is against abortion laws and would like to overturn them all, while Hillary claims she is all for women making independent choices.

Imagine a leader from a different part of the world being brought into focus during the Presidential debate for another country. But, then again, this is Putin and he is one-of-a-kind. Harsh words were exchanged between Trump and Clinton, with the topic of the latter’s private email being hacked, and where she has accused Russia of this espionage. Trump said that Putin was not his “best friend” and then they both went on to call each other a “puppet” for Putin. We can totally see Putin sipping on his vodka as this political circus happened. Oh, and Trump also said that Hillary “does not like Putin because Putin has outsmarted her at every step of the way”.

Trump has never held a political office, but Hillary has been at the forefront of the political game for a while now. He said that the one thing she has over him is experience, though it has been bad experience and continued: “The problem is, you talk, but you don’t get anything done, Hillary”. She responded by reminding him about her presence in the “situation room” while Osama bin Laden was being raided and killed and that at the same time he was hosting Celebrity Apprentice.

It finally comes down to who won this debate, according to voters. Trump has already lost support from college-educated youngsters and women. Vogue declared their open support for Hillary Clinton, though that hardly matters in a more serious political world. Elections are round the corner and it’s going to be a nail-biter. At least we can say Donald Trump is upfront about the person he is, while Hillary has been caught lying on a professional level. Who’s to say who will be favored come November.