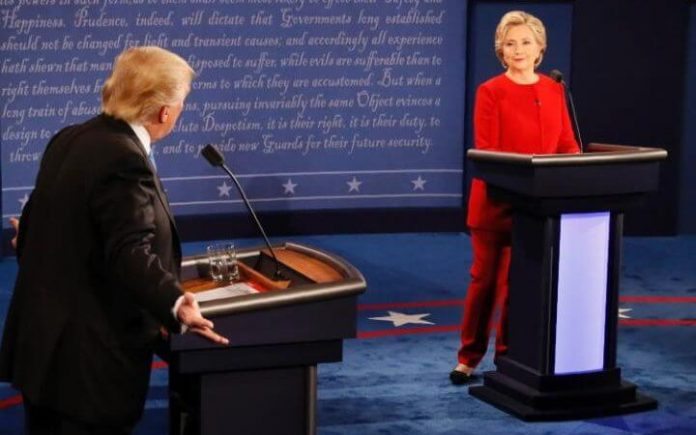 There is no doubt that the presidential debate held earlier this week turned into a heated argument between Hillary Clinton and Donald Trump, with Hillary Emerging as a winner at the end of it. While Hillary kept her calm and asked all the right questions Trump took the bait rather too early and played through the evening in reaction mode!

Here are 6 key takeaways from the first Presidential Debate held on September 26, 2016.

Hillary Clinton: “Donald just criticized me for preparing for this debate, and yes I did. You know what else I prepared for? I prepared to be president.”

Clinton and Trump each had their own agendas. But Clinton was more demure at the opening and then successfully launched bait that Trump just could not resist, though he proclaims that he himself doesn’t throw punches.

He did not like it when Hillary Clinton stated that he may not be as wealthy as he shows off to be. But Trump came back with a statement in which he declared that he would be willing to show people how much he paid in taxes if Clinton showed the public the emails.

Hillary got Trump to a point to lose his cool and admitting that he didn’t pay federal taxes, saying that “makes me smart” and that the money “would be squandered” anyway!

In another instance, Trump insisted that his refusal to pay contractors who’d done work for his businesses was smart.

“I’m certainly relieved that my late father never did business with you,” Clinton said.

Things seemed brighter for the blue collar workers who were impressed that Trump opposed Clinton’s praise of the Trans-Pacific Partnership. Hillary had supported it. And now she has changed her mind. But Trump didn’t want to let up on this point.

He said that Clinton had not done much for manufacturers in the homeland and it seems Trump is leading the people to believe that he will.

3. Trump Gets Caught in Lies

Looks like Donald Trump seems to think he can say things and then deny them. But Hillary was bold to call him out on them.

She brought forth the fact that he had said that the Chinese were somehow the ones responsible for global climate change as some kind of hoax on their part. But Donald repeatedly denied saying so!

Of course, Trump said that!

On November 6, 2012, Trump tweeted, “The concept of global warming was created by and for the Chinese in order to make U.S. manufacturing non-competitive.” It became the most-retweeted item on Twitter during the debate.

He falsely blamed Clinton for birtherism.
Trump said Clinton had been fighting ISIS “her entire adult life.” Clinton was born in 1947; ISIS only formed in the mid-2000s.
He also said murder rates in New York City are climbing, when they are on the decline.
“I hope the fact-checkers are turning up the volume,” Clinton said at one point.

Trump declared that he was fully aware that he would be targeted with inquiries about his ideas of birtherism.

When Holt asked why Trump decided to finally acknowledge that President Barack Obama was born in the US, Trump said it was because he wanted to change the topic to focus on more important issues in the nation, such as creating more jobs for the American population, defeating ISIS and creating a strong border.
Hillary then pointed to the 1970s Justice Department lawsuits that Trump faced over accusations of racial discrimination in housing properties he owned.
“He has a long record of engaging in racist behavior,” Clinton said. “And the birther lie was a very hurtful one.”

Trump has long polled better with men than women, and that gap could grow after Monday night’s debate. Trump was not aggressive with the right issues in the right way and he repeatedly interrupted Clinton too many times and showed no respect to Holt when he tried to interject. When Clinton attacked Trump over his remarks about women, Trump proved her point by digging in against an old foe.

“Rosie O’Donnell, I said very tough things to her, and I think everybody would agree that she deserves it and nobody feels sorry for her,” Trump said.

And it’s rather evident. With two debates to go, this is going to get nastier.

There is no denying that Clinton and Trump are not on friendly terms with each other. The whole debate was gruff and scandalous in nature, each one picking at the other. And Hillary noted his overall disrespect and unkind treatment toward women in general.

For now, Clinton and Trump will have to hold their peace until the next presidential debate on October 9, 2016. Then again, the platform will be open for each one to take shots at the other!