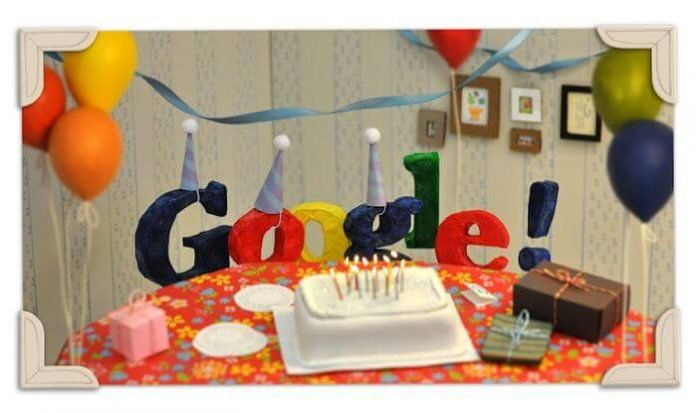 Google is the biggest internet company in the world today, as it celebrated its 18th Birthday yesterday, we ‘googled’ some interesting stuff on the giant. So in honor of Google’s birthday, here 18 facts you definitely didn’t know about Google!

1. People do not seem to know the exact birthday of Google

Yes, it is true that people do not know the exact date of Google’s birthday. The reason is because it has been reported that Google has been given apparently six different birthdays. So to celebrate its birthday, Google has decided that September 27 with be the day to celebrate.

2. Google may even happen to be 19 years old

3. Google has a T-rex dinosaur on site as a special reminder

Indeed there is a T-rex on site at Google. And the reason for this is to remind the workers that everyone is to do their best in order to keep the company from becoming extinct like the dinosaur.

4. A T-rex game likes to hide in Google Chrome

A warning will appear about Google not being able to connect when there is no connection. There will be a dinosaur located beside the warning.

5. There are many unexplored features hiding in Google’s products

Many of the things can be found by doing a search. In fact, they are quite obvious when a person understands what they are. For example, searching with the word “askew” will return the search results in a crooked pattern.

6. Google was not at all pleased by the fact that the name of the company became a generic reference to ‘looking something up’ on the internet!

“Google” and “just Google it” are common words, but the company thought that could undermine all their efforts.

7. Google has bought into far more businesses that you know

Some estimate that Google purchases more than one company each week. Most of the companies tend to be small, but some can actually be rather large companies as well. Most of the products get blended in with others. However, Android resides strongly within Google’s realm on its own accord, and is very well known. This is true of some other products also. Google does not usually sell the companies that it buys.

8. The “I’m Feeling Lucky” button of Google is very expensive and costs it in the excess of tens of millions of dollars each year!

This button is really fun. But for Google it sure costs a lot. By simply taking a person directly to the first result and bypassing any form of advertising, Google misses out on potential revenue from advertising.

However, the company has found a way around this issue with Google instant. This feature ensures that you will see results immediately as soon as you start typing if you have a fast enough connection. Google is then able to collect ample information on you when you are browsing so that it can show you contextual ads instantly.

9. The first Google storage had been constructed using Lego

Google is one of the largest sized storage companies in the world today. There are so many servers stored in a large number of warehouses in order to store people’s stuff, such as photos, emails and so much more. However in the very beginning, when the storage was termed simply as Backrub, the storage comprised some hard drives in a container formed of Lego.

10. Google proves to be very generous to the spouses of employees who die while working for the company

Google pays the husband or wife fifty percent of the salary of the deceased person for the next ten years. Even the children receive some form of payment as well until they become adults.

11. One search on Google requires more computing power than it took to send astronauts of Apollo 11 all the way to the moon

The fact is that searching on Google is simple to do and is done in a fraction of a second. However, the reality is that the computing and networking power which are necessary to search the vast spectrum of the internet is enormous and is much more than the small amount of code and computing that were needed to get people onto the moon.

12. One time Google experienced a crash for a period of five minutes, which resulted in taking 40% of the internet down as well!

It was on August 19, 2013 when the famed Google did not work for a total of five minutes. This resulted in Google taking much of the internet traffic. While it is true that there are many companies have risen up to also provide search opportunities for people, Google still dominates a large part of the internet.

There is a lot of beautiful green space at Google. And that could require a lot of mowing for sure. So Google has come up with the ingenious idea to have some goat to take care of the grass for them According to Google employees, they love the goats because they are not noisy like mowers and they don’t cause any pollution at all. Additionally, they are quite cute.

14. Google has lots of dogs on site too

Google loves dogs and lets people bring their dogs to work. This seems to boost the overall morale of the work place. Note that cats are not banned from Google. But cats don’t like all the dogs, so there are not many cats around.

15. Google has given a dog the title of Top Dog

According to Google’s official history, the dog of the owner of Google, whose name is Yoshka, is the first and only dog to be given the name of Top Dog back in 1999. A post appeared on Google by Yoshka stating that all dogs are welcome to come to Google.

Google’s homepage is simple and that is all it needs as is viewed by millions around the world everyday. So any changes to that page, even if they are small ones, will be indeed greatly noticed. In the beginning, the Google logo was situated to the left. But it then moved to center stage in 2001 and has been there ever since. This was a slight change, but yet a big one at the same time, as it changed the homepage forever.

17. Since that time, Google continues to make small changes to its homepage

There have been some rather small adjustments to the logo, which have included a slight change regarding the layout of the letters of the word “Google.”

They have also managed some big changes by implementing ways of how the words are written, which included the usage of a new font too.

18. Changes include the name

In recent years, the biggest and most notable change occurred when the name of the company was changed from Google to Alphabet. That is because the company was dominating most of the search, information, internet and other aspects of the business.

When people should refer to the company as Alphabet, people still often refer to it simply as Google.