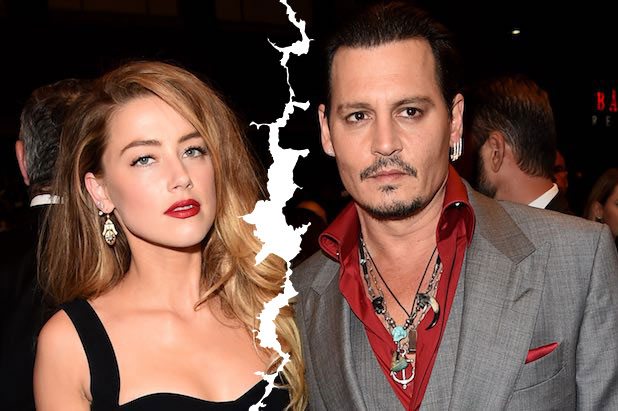 The tabloids have been rife with news about an ongoing seemingly bitter divorce battle between Johnny Depp and Amber Heard. The couple, who have been together for a total of 4 years and married for 15 months of that time, are heading to part ways, but not without publicly shaming each other. Here is a timeline at how their relationship went from being a fairytale to a nightmare and the way the public is inviting itself to comment and take sides.

In 2009, Johnny Depp and Amber Heard both worked together in the movie The Rum Diary, a film with promise that sadly did bad at the box office. However, the film was shot at Puerto Rico, and though sparks didn’t fly between the two at the time, it did set the note for the future couple who share a love for the Blues. Heard was in a lesbian relationship with photographer Tasya van Ree while Depp was still in his decade-long partnership with French actress and mother of his two children, Vanessa Paradis.

It was in 2012 that they were officially spotted together, even though Johnny had yet not announced his split from Paradis. Since then, Amber has firmly been by his side through their whirlwind romance that has spanned continents and the changing seasons. They continued to date, even though they kept their affair private, with a few photographs appearing now-and-again from different tabloid hot on their heels. Everyone was interested to get to know more about the relatively unknown bisexual blonde actress who managed to steal Johnny’s heart to the extent of him leaving his long-term commitment to Vanessa and his family with her.

Finally, in January 2015, Johnny Depp was officially engaged to Amber Heard and at the time her rep stated she “couldn’t be happier to be engaged and excited to share the rest of their lives together”. Then on February 3, 2015 they tied the knot at his LA mansion with close family and friends in attendance, and officially became Mr. and Mrs. Depp. Though this was not Johnny’s first marriage, it was a big step he made in a long time, and people began to assume that he had finally given up his wild ways and settled down with a blatantly beautiful woman who seemed devoted to him.

Though not much was reported about the newly wed twosome, they did make headlines when Heard’s dogs were illegally transported to Australia and they had to make a public apology, which was so awkwardly done and Depp later made fun of in an interview. They looked pretty out of place in front of the camera, but then again, only weird things are expected from Johnny, so no one saw any signs that something could be terribly wrong beneath the surface.

It was on May 24th that the world was shocked at the news of Amber Heard filing divorce papers in a California court citing “irreconcilable differences” with the Pirates Of The Caribbean star, just 3 days after the latter’s beloved mother had died. If that wasn’t news enough, she appeared a day later while filing the papers, with a visible bruise under her right eye and that’s when the media frenzy began. As the days progressed and loud accusations against Amber began from Johnny’s camp that included friends and a handwritten letter by ex-Vanessa Paradis insisting on his innocence, more and more evidence began being stacked up by Amber to cement her claims that she has suffered “for years from verbal and physical abuse at the hands of Johnny”. From text messages of apology on behalf of Depp by his assistant, to more photographic evidence of physical violence, Johnny is being portrayed as the husband who turned into an abusive monster while inebriated – it is quite public knowledge of his infamous history of drug and alcohol abuse.

Though the LAPD has insisted that the night they responded to an emergency call when Johnny last got physical with Amber they didn’t notice any telltale signs of abuse, friends and lawyers of Amber are bringing in the evidence as much as they can, portraying her as a typical woman who suffers from years of abuse and responds like any victim would – blaming herself, hiding the evidence to defend the one she loves and not reporting the instances as they happened. On the other hand, Johnny’s camp has been publicly bashing the actress, claiming she’s out to get Johnny, she’s been manipulating him for years and that she’s looking for a fast way to take a chunk of his money – an estimated $350 million he earned from playing Jack Sparrow in the Pirates franchise.

The public, meanwhile, is having a field day dragging Amber through the dirt, calling her names such as “gold digger”, “whore” and every other possibly derogatory term a woman can be insulted with. People are supporting beloved characters they have seen on screen, rather than a man with a possible serious problem and acting as if this is the first time an abused woman has been hesitant in reporting an abuser whom she loves.

It is only left to be seen what the courts decide, and hopefully justice will truly be served, without anyone’s career and reputation getting damaged in the process, but with a view to help whoever was harmed in this relationship.